Holy moly we’ve just taken grilled cheese to a whole new level with this bananas foster recipe. It’s gooey with the caramel and cheese, filling with the bananas, and sweet with the sugar. I truly think this is going to be your new go-to when you have a sweet tooth. 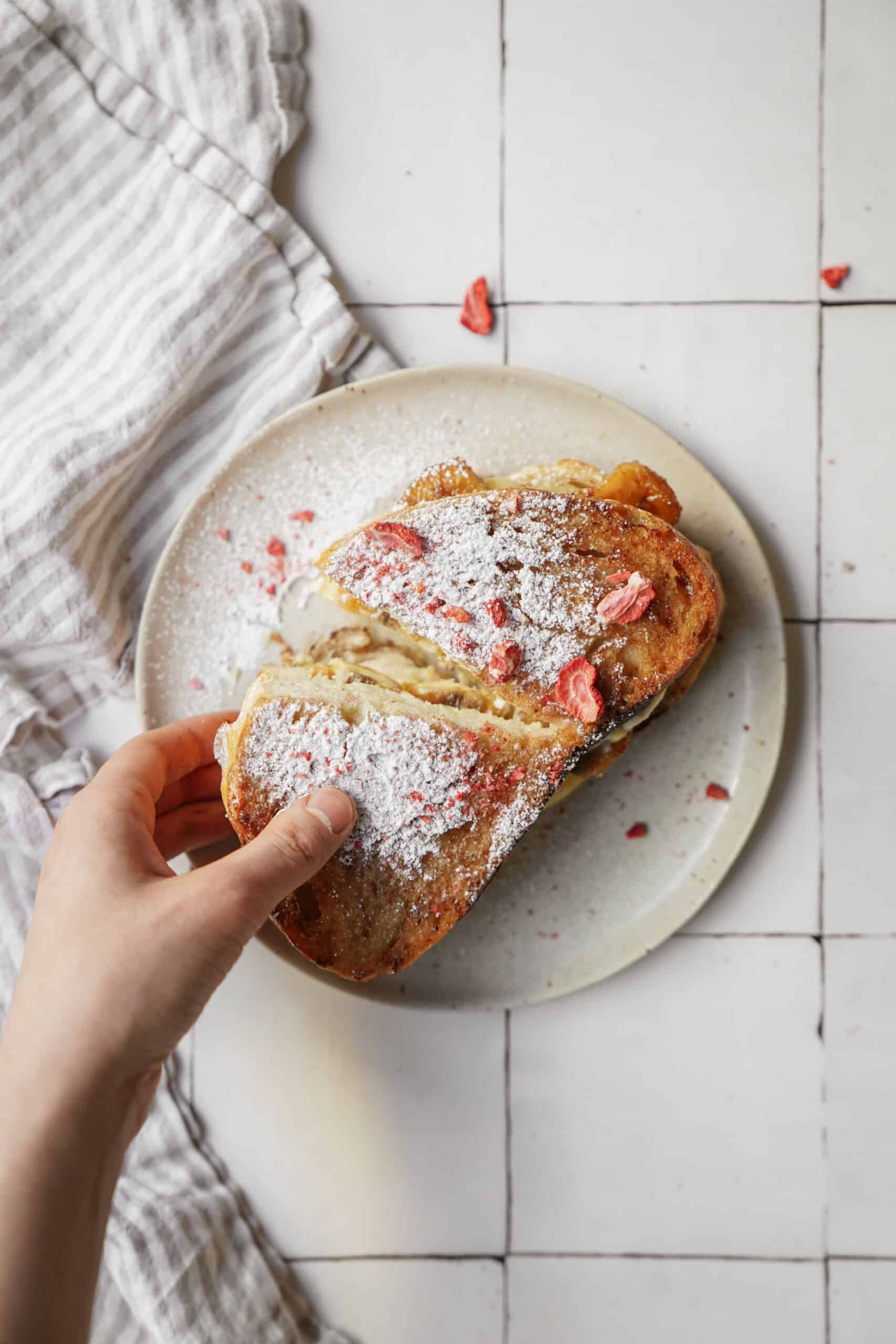 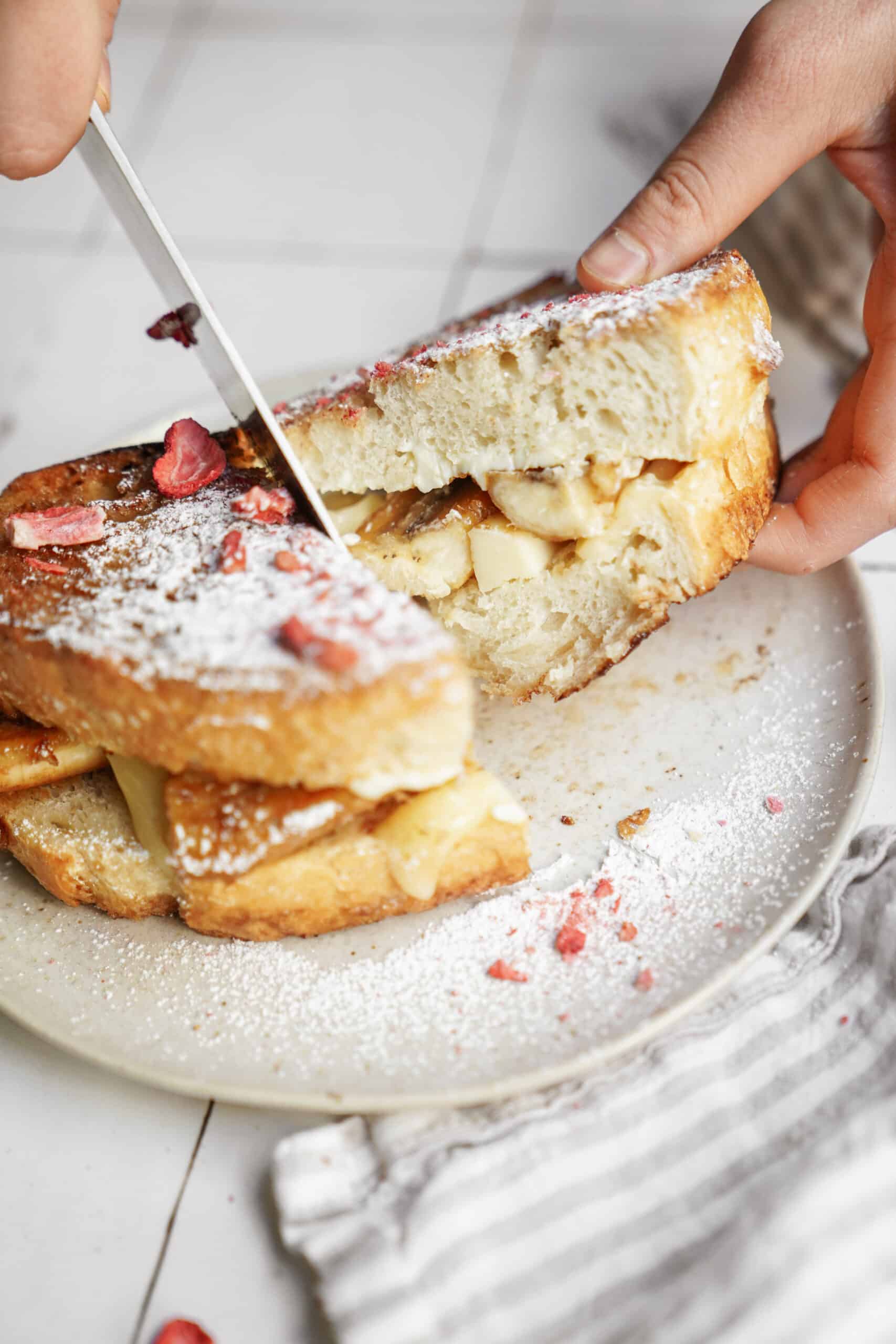 Mascarpone: Mascarpone is like a fancy, better, Italian cream cheese. It can be used in both sweet and savory dishes and provides a rich, creamy element to them that I love.

Brie: Any grilled cheese with brie (sweet or savory) is my jam. Brie is a soft cow’s-milk cheese named after Brie, the French region from which it originated.

No-Knead Bread: Make your own homemade bread for this recipe. I have a simple, no-knead recipe up on my blog that only takes 4-ingredients and an hour of your time. 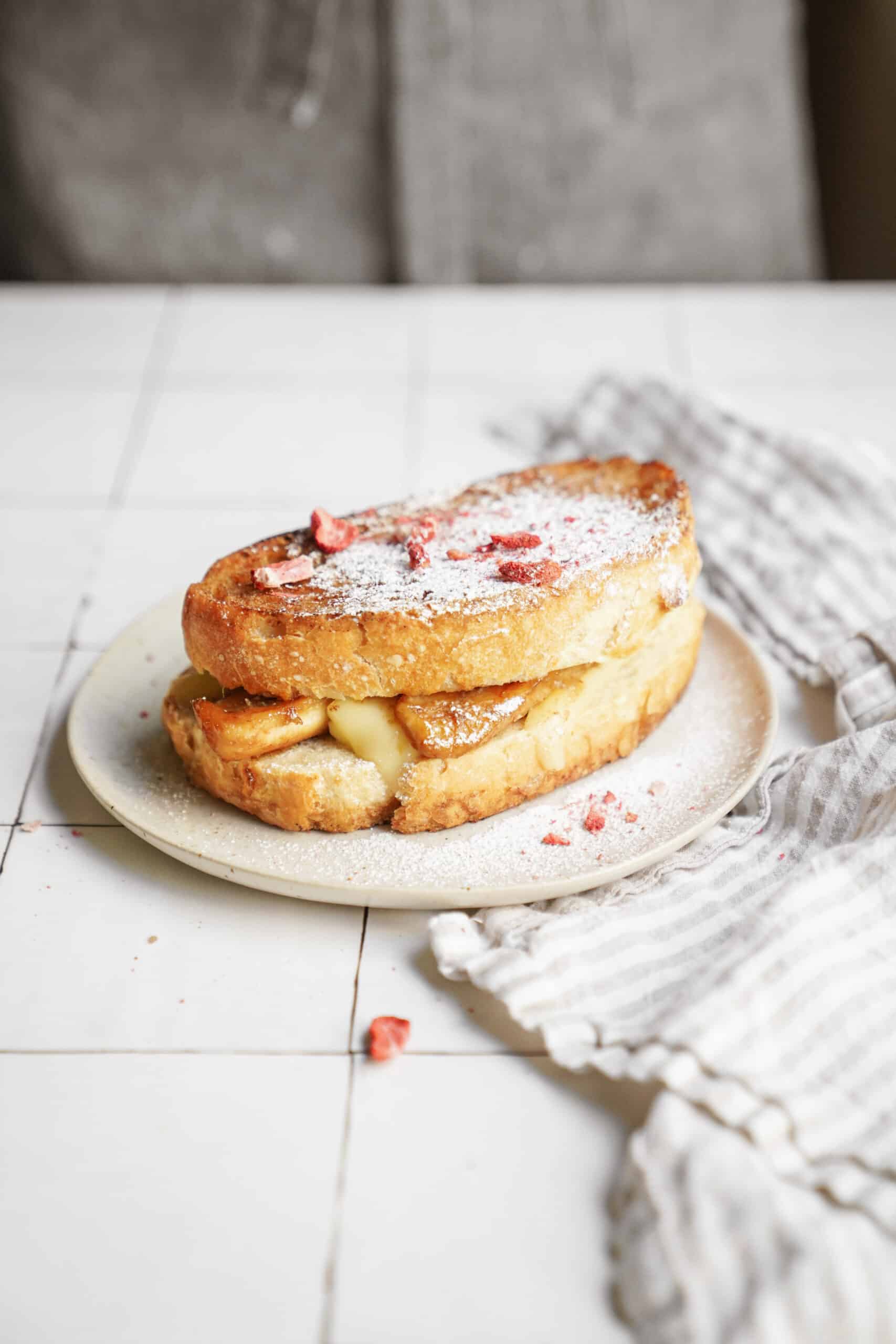 How do you make this bananas foster recipe? 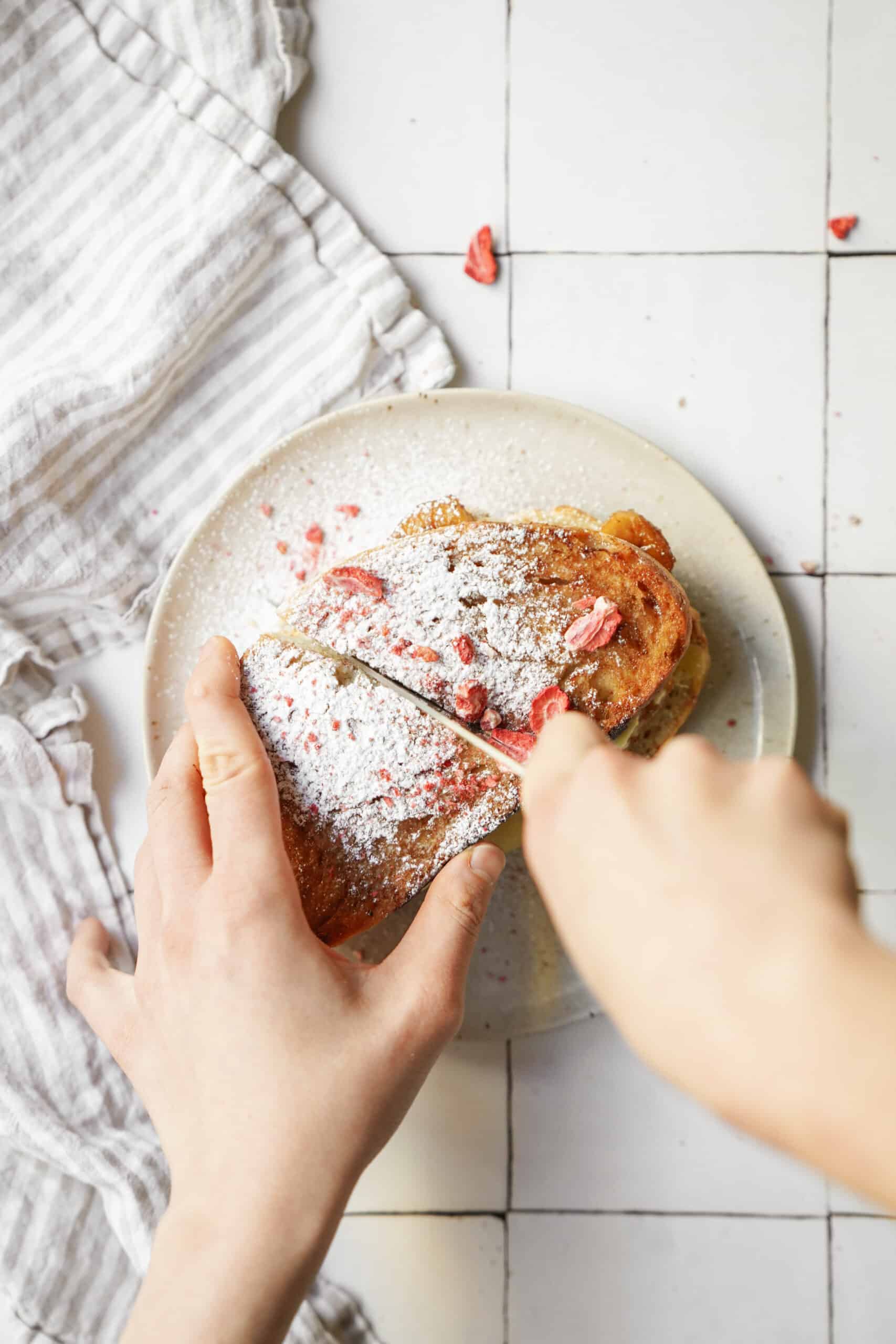 What type of bread should I use? If you don’t want to follow my homemade bread recipe linked below, you can buy store-bought bread. I would opt for sourdough, or brioche, but any sort of bread works for this.

How do I make this recipe vegan? Replace brie and mascarpone with your favorite plant-based cream cheese and soft cheese. Also use plant-based butter.

Serving: Get creative and serve with melted chocolate, fresh fruit, toasted nuts, or even vanilla ice cream. Even drizzle with maple syrup!

Fruit: I used freeze-dried strawberries but you can use any freeze-dried or fresh fruit in this recipe. Get creative!

What is bananas foster? The classic version of the recipe is a dessert made from bananas and vanilla ice cream with a sauce that is made from butter, brown sugar, cinnamon, dark rum, and banana liqueur. I put my own unique spin to this recipe variation.

If you want more deliciousness at the click of your finger, be sure to check out FoodByMaria’s Newest Mini Cookbooks. Limited time offer of 3 for $20USD.

If you want more Greek Recipes, check out our Free Greek Recipe Mini Cookbook!  We also have an incredible APP for you to access at all times (yes, online and offline) all our recipes with a click of your finger – check it out here.

Loved this recipe? Good! We can give you access to Maria’s most famous recipes, check out our Top Ten Recipes Mini Cookbook! We also have an incredible APP for you to access at all times (yes, online and offline) all our recipes with a click of your finger – check in out here.
Print

This unique twist on a bananas foster recipe turns it into a delicious grilled cheese that is perfect for dessert or a sweet snack.

In a large pan over medium-high heat, add the butter and brown sugar. Heat thoroughly and stir with a spoon for a couple of minutes. It will begin to bubble and start to look like a caramel sauce.  Peel and slice the bananas in half, length-wise, and add them to the pan face-down. Cook the bananas on each side for a couple of minutes until golden brown and caramelized. Sprinkle with cinnamon at the very end.

Remove from pan immediately, and pour extra sauce over top. Set aside and allow to cool.

In a small bowl combine softened butter, sugars, and cinnamon. Whisk until combined. Set aside.

To assemble, place cut pieces of brie cheese on top of two slices of bread, covering as much surface area as you can.

Heat a large pan over medium-high heat.  Add the assembled sandwiches, on the buttered side. Cover with a lid, and cook for 3 – 4 minutes until golden brown. Before flipping, spread the rest of the cinnamon-sugar butter on the other side.  Flip, and allow to cook for another 2 – 4 minutes. Remove from heat.

Use any type of bread you desire; sourdough, brioche, or regular!

Replace brie and mascarpone with your favorite plant-based cream cheese and soft cheese. Also, use plant-based butter to make vegan.

Get creative and serve with melted chocolate, fresh fruit, toasted nuts, or even vanilla ice cream. Even drizzle with maple syrup!

This can be a delicious breakfast item or a fun + surprising dessert!