Holy hell! I think I struck gold with these snickerdoodle cupcakes. I’ve taken your favorite holiday cookie and made it into a delicious cupcake with vanilla swiss meringue buttercream on top. These will have your whole family thinking you are a professional baker. 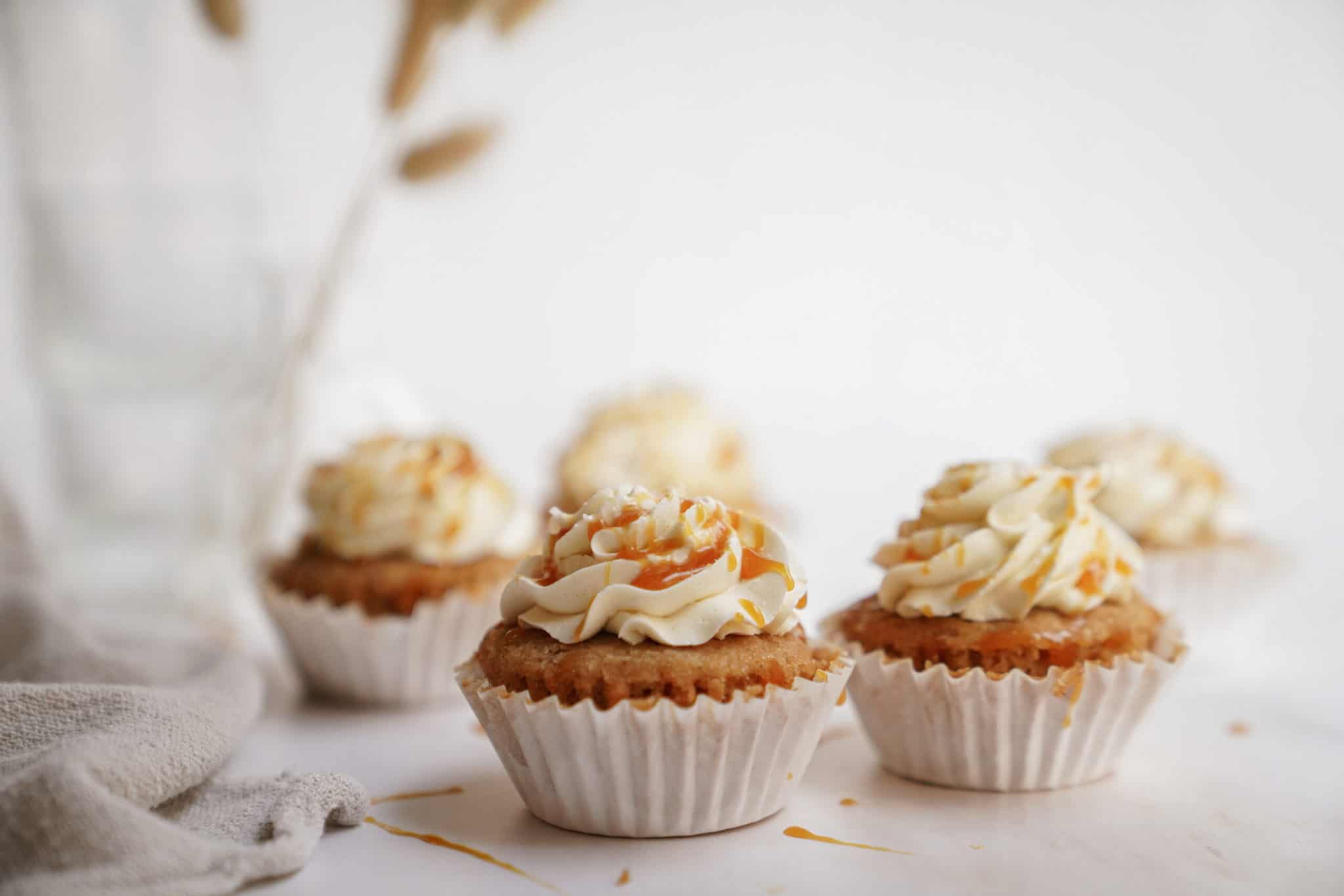 Why you’ll love these snickerdoodle cupcakes:

Gluten-Free Flour: For this recipe, I’ve used Bob’s Red Mill 1:1 Gluten-Free Flour to make these snickerdoodle cupcakes gluten-free. You could also use regular flour as well if that’s what you have on hand. Just make sure you always check the conversions to ensure you are substituting the right amount of flour for the recipe. Not everything is 1:1.

Buttercream: The buttercream icing for this recipe is made with egg whites, sugar, and vanilla. Buttercream is used for usually filling, coating, or decorating cakes or cupcakes. You can also flavor buttercream in various ways like with chocolate, fruits, or other liquid extracts other than vanilla, however, I love these snickerdoodle cupcakes with vanilla. 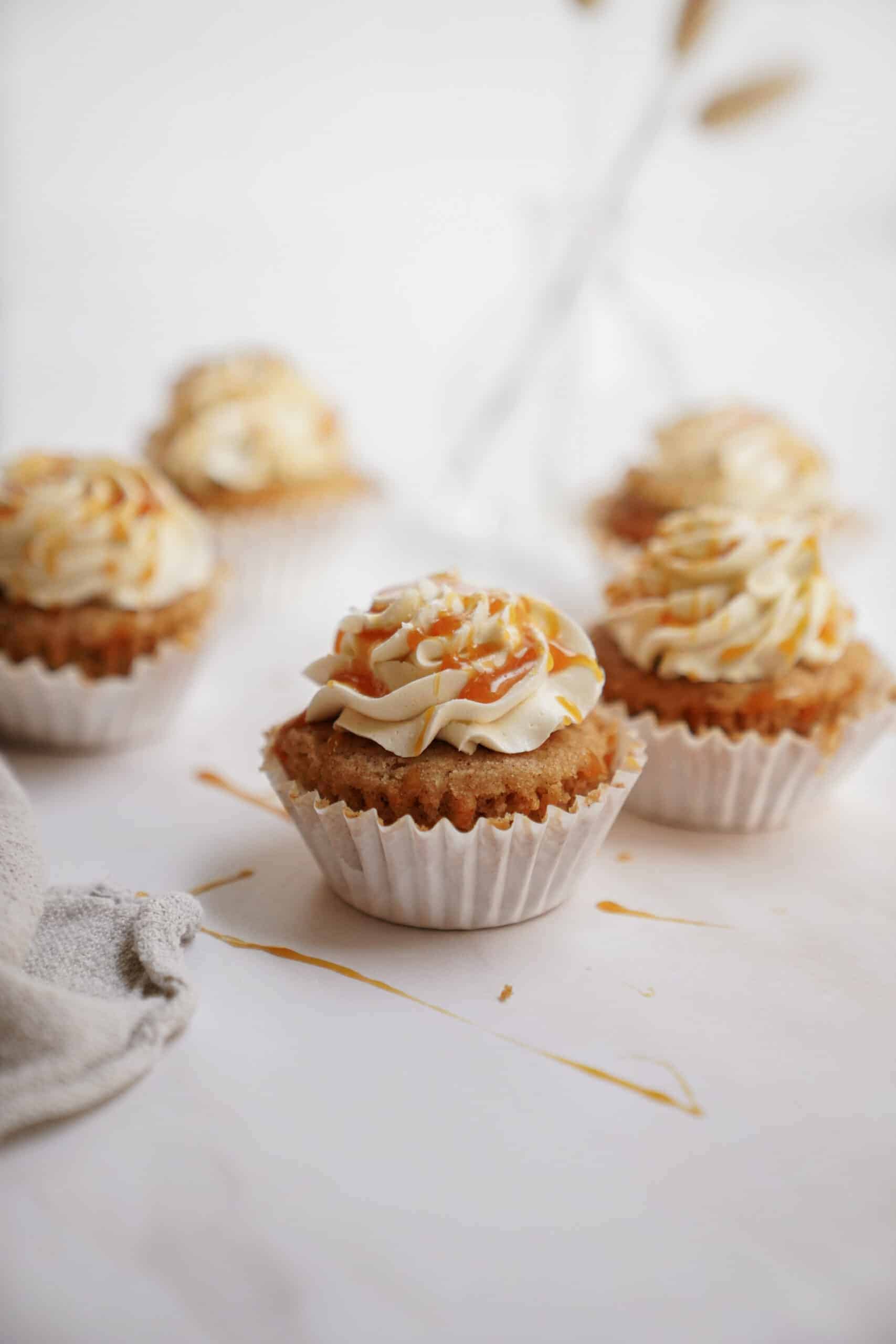 How to make snickerdoodle cupcakes: 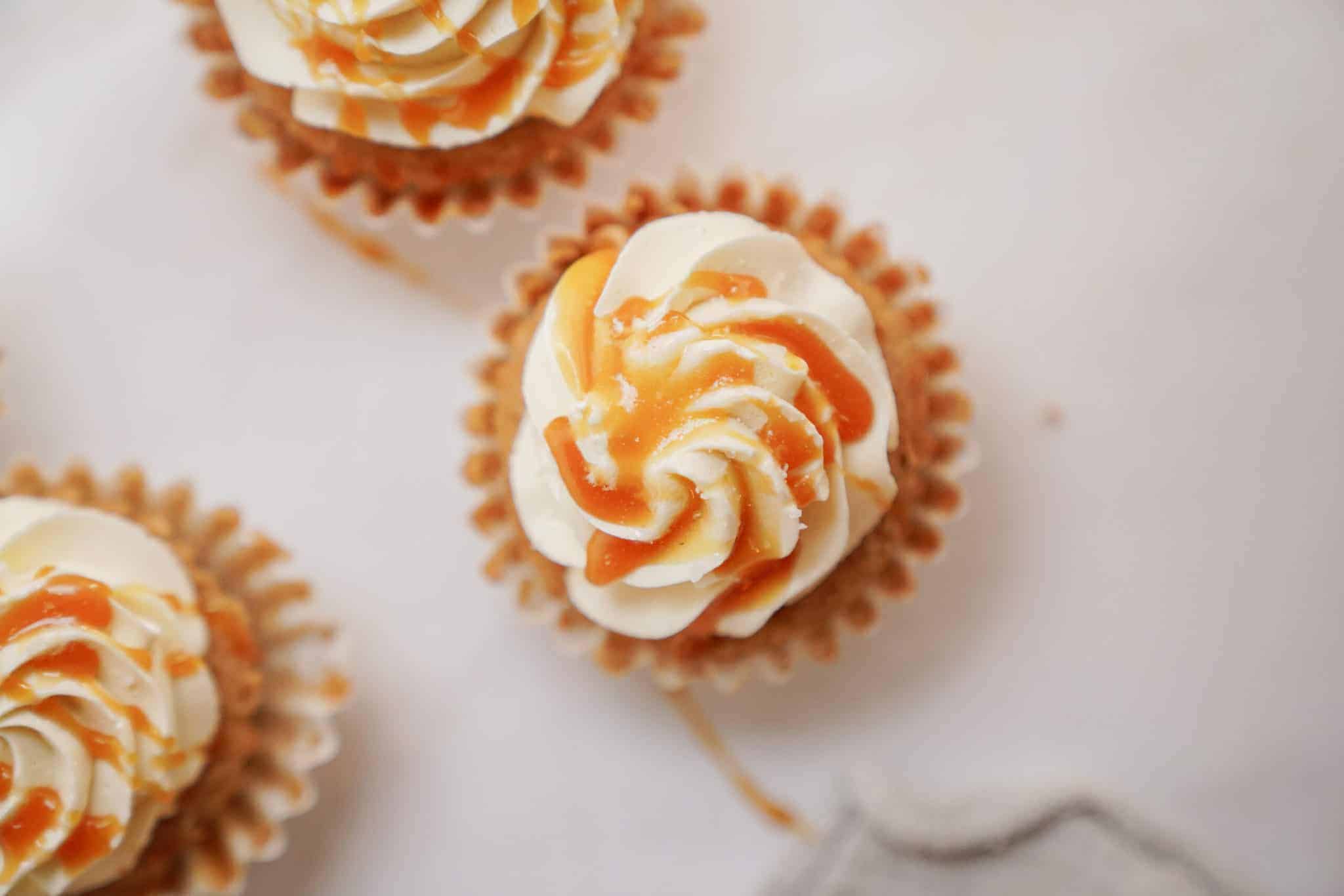 Buttercream Tip: Scoop out some of the centers of the cupcake and fill it with caramel sauce for a delicious surprise.

Can I do a different flavor of icing? Yes! This buttercream recipe is an amazing base for so many flavors- add melted chocolate or lemon juice + zest or peppermint extract or anything you wish! Get creative and use this buttercream for your next cake or cupcakes!

Can I use this recipe to make a cake? You can even make these snickerdoodle cupcakes into a 2 layer 8-inch cake! Monitor baking time-testing with a toothpick for doneness.

Storage: Store cupcakes in the fridge in an airtight container for 3 – 4 days or in the freezer for 1 month.

If you want more deliciousness at the click of your finger, be sure to check out FoodByMaria’s Newest Mini Cookbooks. Limited time offer of 3 for $20USD.

If you want more Greek Recipes, check out our Free Greek Recipe Mini Cookbook!  We also have an incredible APP for you to access at all times (yes, online and offline) all our recipes with a click of your finger – check it out here.

Loved this recipe? Good! We can give you access to Maria’s most famous recipes, check out our Top Ten Recipes Mini Cookbook! We also have an incredible APP for you to access at all times (yes, online and offline) all our recipes with a click of your finger – check in out here.
Print

These delicious (and easy) snickerdoodle cupcakes are topped with a creamy vanilla swiss meringue buttercream that is to die for.

For the Vanilla Swiss Meringue Buttercream:

For the Caramel Sauce:

Allow the eggs and milk to sit out and come to room temperature.

Preheat the oven to 350F and prepare a couple of cupcake tins with 15 liners.

In a large bowl, add the flours, sugars, baking powder, cinnamon and salt.  Whisk until combined.

Add the softened butter, and use a stand or hand mixer to incorporate. Whisk until the texture resembles bread crumbs.

In a medium-size bowl, whisk together the eggs, egg whites, milk, lemon juice and vanilla until combined.

Bake for 18 – 20 minutes. Remove from the pan immediately and allow to cool on a wire rack.

For the vanilla swiss meringue buttercream, bring a pot, with a few inches of water, to a strong simmer.

In a medium-sized stainless steel or glass bowl, combine egg whites and granulated sugar. Whisk to combine. Set the bowl on top of the pot with simmering water. The bowl should remain higher than the water level. Continuously mix and heat the egg whites and granulated sugar, until the sugar has dissolved. This will occur at 120F (50F). Once the sugar has dissolved, remove the bowl from the heat and transfer it to a new medium or large-sized bowl. Using a hand or stand mixer, whip the egg whites and sugar on high speed until stiff peaks have formed. The meringue will look shiny. This will take 5 – 10 minutes.

At this time, begin to add your soft butter in increments.  Add ¼ cup of butter at a time, until fully incorporated. Continue to whip at high speed, scraping the edges of the bowl in between. Once you have added all OR most of the butter, continue to whip until it forms a light and fluffy icing.  (During the process of adding butter, it may seem soft OR look like it is curdled- continue adding your butter and whipping on high speed. The buttercream will come together.)

Once the buttercream has come together, add the vanilla and whip on medium speed until fully incorporated.  Use immediately to frost cupcakes.

To make the caramel sauce, add the granulated sugar + water to a medium-sized pot. Using a spoon, combine the sugar are water together, not leaving any excess bits on the side of the pot. Place the pot on high heat and keep a watchful eye as it begins to change in colour. Do not stir the caramelizing sugar at this time. Add your heavy cream to a small bowl- heat in the microwave until warm to touch. Set aside. After 5 – 10 minutes, you will see the sugar turn into a deep brown-amber colour. At this phase, put on an oven mitt and hold whisk in that hand. Reduce the heat to medium, and pour about 2 tbsp of the cream into the pot.  Quickly stir the cream with the caramelized sugar. Repeat these two steps until all of the creams has been used and is incorporated into the sugar. If you see clumps of sugar, turn the heat up to high, whisk and cook until the caramel is smooth. Transfer the caramel to a glass or stainless-steel bowl and set in the fridge to cool for about 20 – 25 minutes. Stir every 5 – 10 minutes. Afterwards, remove the caramel sauce from the fridge. Using a hand blender incorporate the softened butter and salt in a couple of increments until fully incorporated.  Transfer the caramel sauce to the fridge until ready to use.

Next, prepare a piping bag with a large star tip, and fill ⅔ full of vanilla swiss meringue buttercream.

To pipe, hover the end of the star tip 1 cm over top of the cupcake- besides the strawberry filling. Firmly squeeze the bag until icing comes out and touches the base. Continue to squeeze and move your hand in a circular motion around the filling while gradually layering the icing overtop. Once you have reached the centre, lightly press down and flick your wrist to create a peak. Repeat this for all of the cupcakes.

Next, using a spoon or squeeze bottle drizzle caramel sauce on top of all of the cupcakes. (reheat the caramel slightly if it is too stiff to drizzle)

Garnish your cupcakes with some sprinkled cinnamon and flaky salt! Enjoy!!!

Scoop out some of the centers of the cupcake and fill it with caramel sauce for a delicious surprise!!

This buttercream recipe is an amazing base for so many flavors- add melted chocolate or lemon juice + zest or peppermint extract or anything you wish! Get creative and use this buttercream for your next cake or cupcakes!!

Save extra icing in the fridge, allowing it to come to room temperature prior to whipping again.

Ice the cupcakes by hand if you wish! Give it a rustic feel ☺

Be careful when making the caramel sauce! Please take extra precautions not to burn yourself.

This recipe is great for parties- you can even make this into a 2 layer 8-inch cake! Monitor baking time-testing with a toothpick for doneness.

Store cupcakes in the fridge in an airtight container for 3 – 4 days or in the freezer for 1 month.