Tuna Melt. Vegan. Tuna Melt. Where the hell do I start with this? It’s unreal! I have been following along and watching from the sidelines as Good Catch Foods slowly but surely dominate the fish alternative market. My good friends, Derek and Chad Sarno, are some of the souls behind this powerhouse and I am so proud to be joining their team and helping spread their message, which I love! 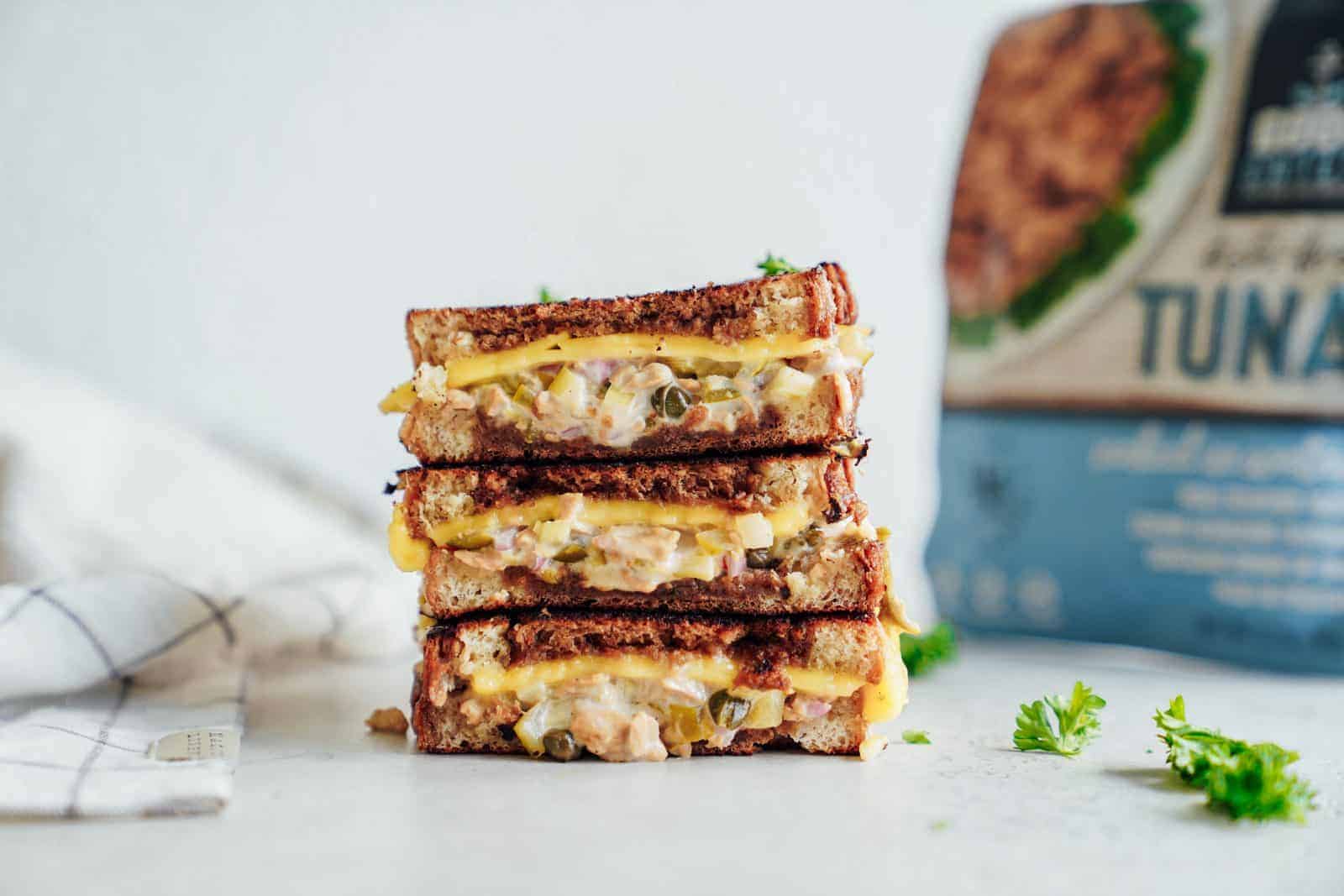 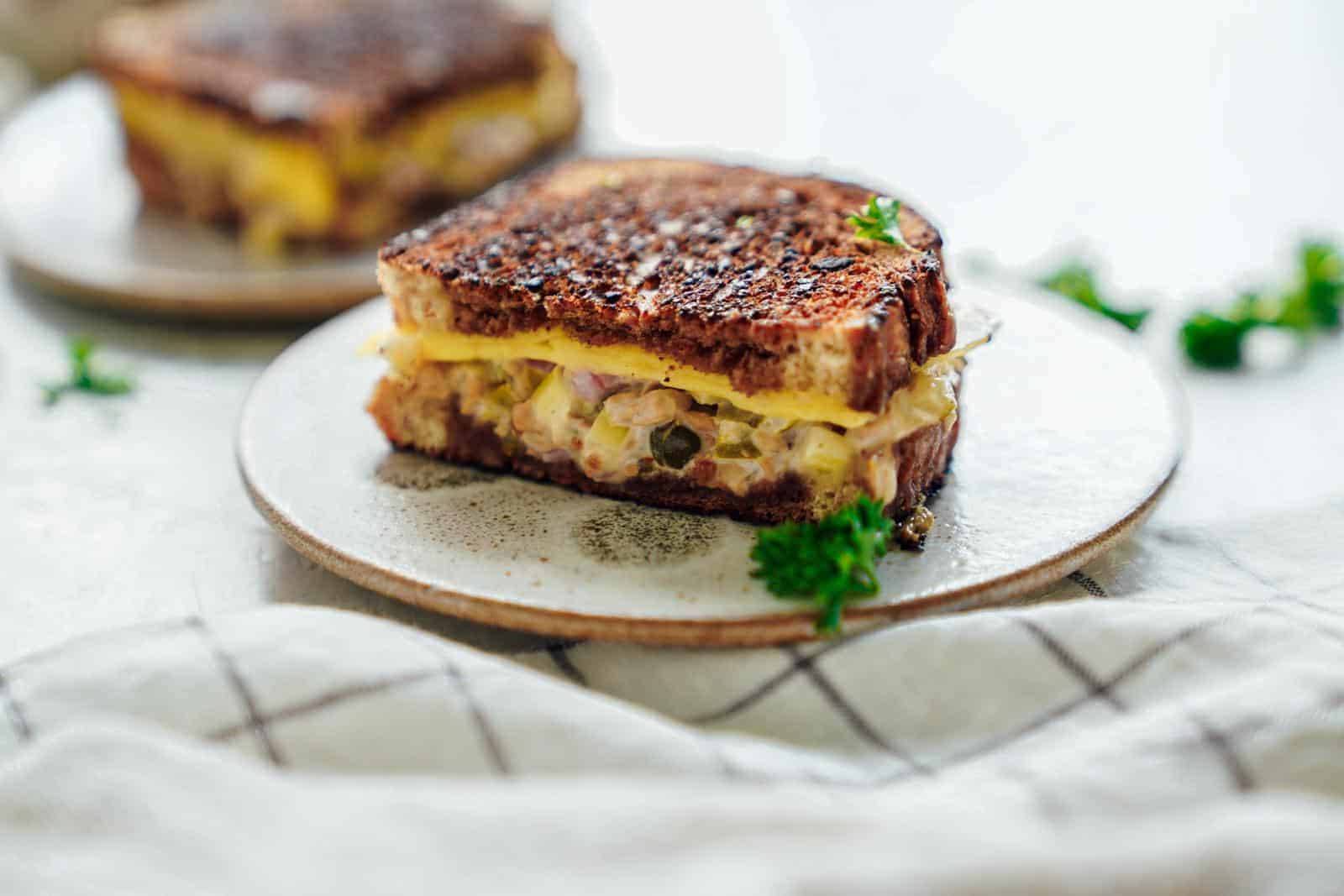 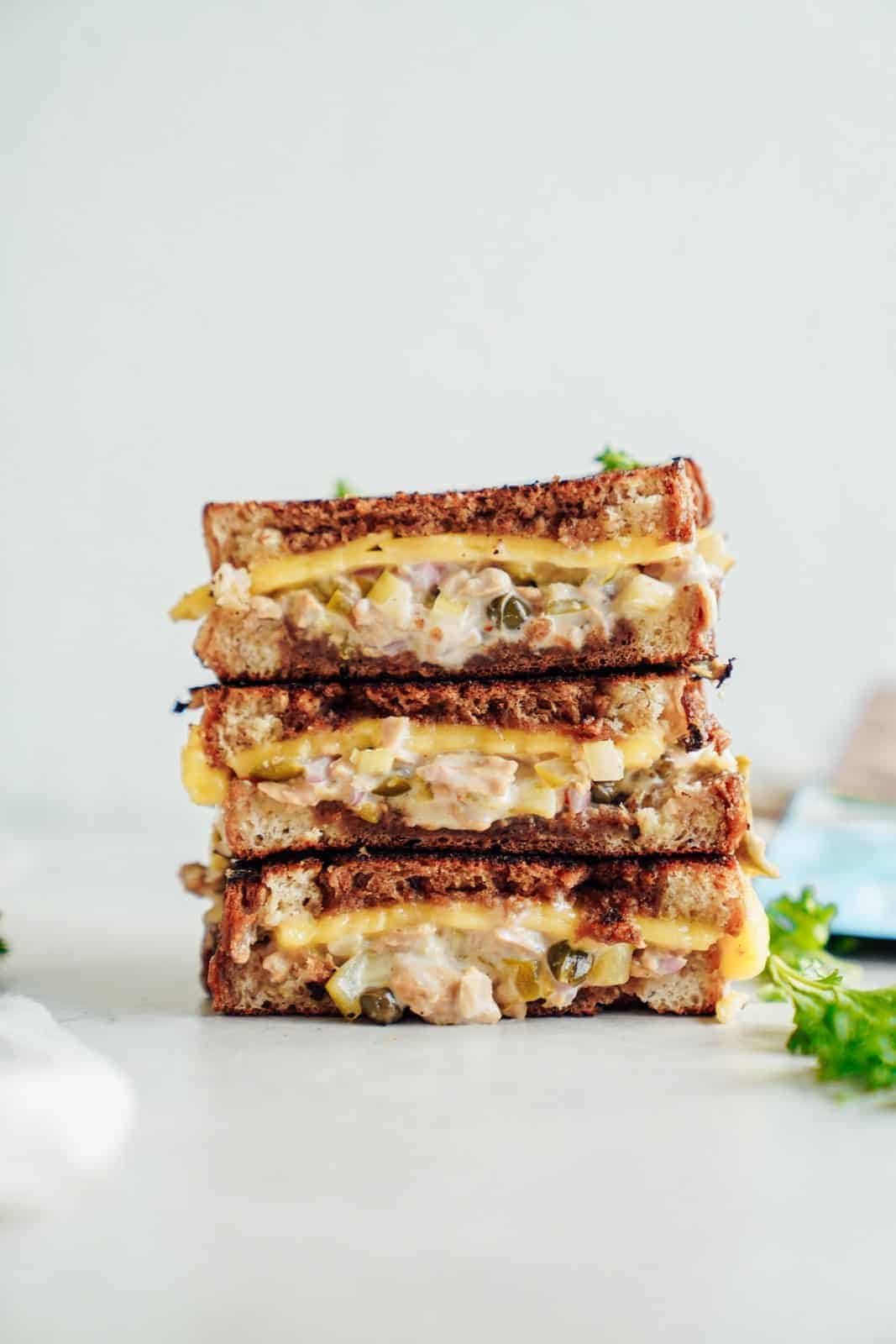 You’re probably curious on how Good Catch Foods can make a plant based, vegan tuna that tastes like the real thing, without harming the fishies to make it. Their tuna is made with a plant protein blend, and is great to use in any traditional tuna recipe, whether melts, sushi rolls, sandwiches, or casseroles. 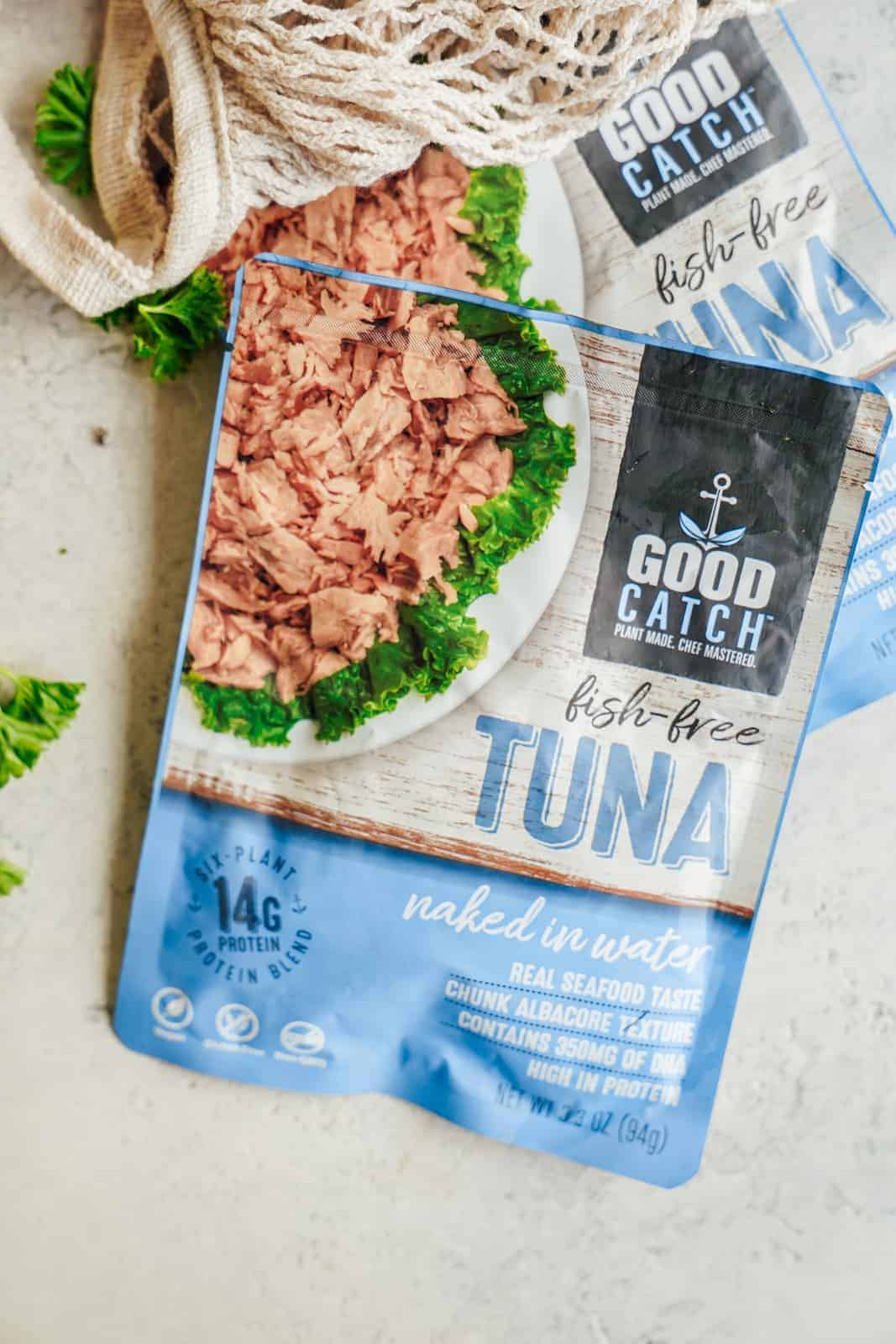 What’s great about this tuna substitute is that it’s high in protein and omega-3, which means it compares to the nutritional value of real tuna. You get all the health benefits of consuming fish, minus the negative aspects like mercury, dioxins, microfibers, etc. Plus, obviously I love that this tuna is vegan, gluten free, and non-GMO.

What’s amazing is that this plant based tuna tastes just like real seafood. They use a algae oil, and special plant ingredients that capture seafood’s flavor. Combining that with the six-legume blend to get the texture of tuna, you may even be able to trick the fish-lovers in your house. Their legume blend includes chickpeas, soy, peas, lentils, fava and navy beans. Plus, the blend is way easier to digest then consuming a single legume.

What I’m super excited for is that they’re introducing frozen entrees and appetizers soon too! These will include things like plant based crab cakes, plant based sliders, and more.

Did you know that fish learn faster than dogs? We wouldn’t eat our dogs would we? 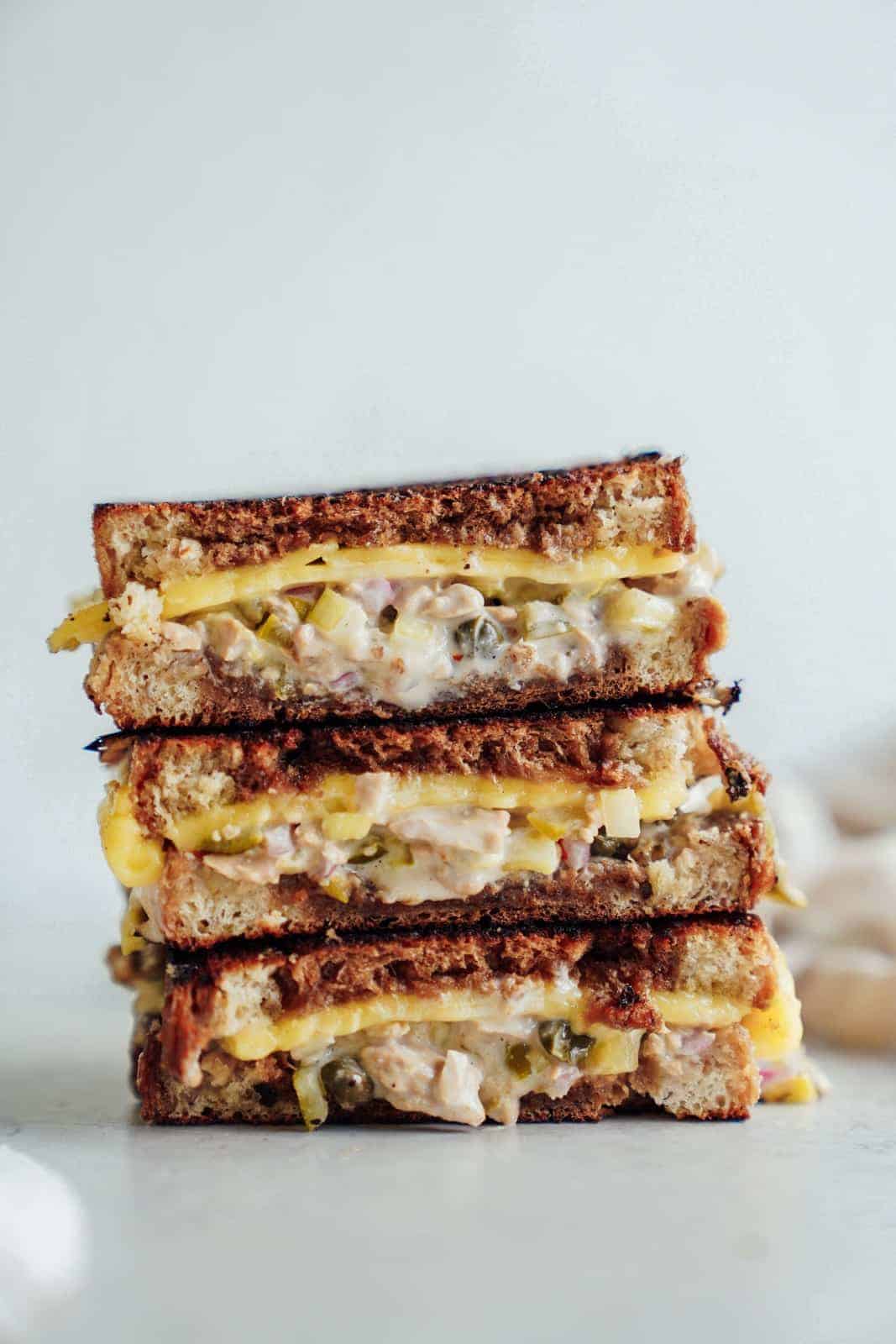 The dark side of tuna fishing

Not so shockingly, tuna don’t like to be caught. They are often chased until they move into a tight group and a net catches them. From there, fish are often dragged against rocks and debris, suffocated, and the long list of bad things goes on. That’s also only if they are caught in the ocean, where they live and belong. Farms are becoming more and more popular for the fish market and just by the name, you can tell it’s not a pretty (or humane) sight.

The best part of consuming Good Catch Foods tuna alternative is that you’re doing good and not doing any harm to the oceans or fish themselves. You can consume their ocean-friendly products without the guilt!

This vegan tuna melt recipe is literally like the real thing but BETTER! I’ve spiced up the traditional recipe by adding a few of my favorite ingredients like capers and jalapenos to spice it up and make it more flavorful. The bread I used is dense, and crispy, while the tuna is so soft and gooey from the vegan cheese. Each bite of one of these melts is hands down delicious and it’s quickly become my favorite, quick and easy sandwich.

Start thinking of where your food comes from. Read this article to get started!

This vegan tuna melt is simple, and allows you to enjoy the taste of tuna as a vegan. A perfect meal to make for lunch!

Into a large bowl combine all your ingredients, stir lightly and set into the fridge overnight.  Cover with wax paper.

For the Tuna Melt:

Generously butter both sides of your rye bread.  Place two pieces onto a hot skillet and cook on medium heat for around 1 minute or until golden.  Flip the bread and scoop 3-4 large tbsp. of your tuna mixture on one side of the bread.  Place your vegan cheese on top and cover with the other side of bread.  Using a spatula lightly place pressure onto the sandwich.  Cook for around 2 minutes then flip and repeat until cheese is melty and the sandwich has flattened and remains in position.

To serve, cut in half and enjoy with chips, salad or on its own.  This melt is going to change your life, it’s so damn good!

Tuna mixture lasts for up to 5 days in the fridge in a tight sealed container.

Is this sold in Canada, specifically in Edmonton Alberta? I have seen the fish cakes and crab cakes but not the tuna. If not, do you ship to Canada?

Where do I find the tuna?

It is available at Whole Foods. You can find a location on their website!

I couldn’t find a place to buy this product. Does it require refrigeration for shipping? Is it priced at or below the real thing?